Dear Todd: Thanks for the info. Yes, I do know about the many-quark-blob report (https://home.cern/about/updates/2017/03/lhcb-observes-exceptionally-large-group-particles ). It is just a kind of ‘quark-chemistry’, having no insight for the foundation of TOE-physics.

LHC (at CERN) should report its 2016 data at two conferences in two days:

Instead of commenting their reports afterwards, I will make a statement here first. The book {Nature Manifesto — Nature vs Bullcrap; 560 pages} is available limited time at https://tienzengong.wordpress.com/2016/12/10/natures-manifesto-on-physics-2/ , and ALL issues are addressed in it. That is, there is “Nowhere to Run” by any further experimental works but to vindicate the book {Nature Manifesto}.

However, I will elaborate this statement a bit more in this post.

For the mainstream theoretical physics:

One, Standard Model: it is just a hodgepodge from the experimental data (equations are just the results of the reverse-engineering to fit the data). The only theoretical principle is the “Higgs mechanism”.

For the mainstream experimental physics (including the observational astrophysics):

First, some facts are established.

One, with collider: searching for the BSM particles (as dark mass)

Four, with direct detection of WIMP

The theoretical base for the mainstream physics is now very clear, with five pillars.

SUSY will definitely be ruled out again in these upcoming LHC data reports:

First, direct production at LHC: No.

Third, as invisible bystander (from EDM, LHCb data): No.

Inflation is now even denounced by some of its most important inventors (such as Paul J. Steinhardt), see {Wrong about inflation (By Anna Ijjas, Paul J. Steinhardt and Abraham Loeb; https://www.cfa.harvard.edu/~loeb/sciam3.pdf )}. For the {Emperor’s new dress story}, it was a child pointing out the nonsense. For {inflation}, it is now declared as crap by its tailor.

Second, via direct production at LHC: No.

Third, via AMS02 or cosmic gamma rays: No.

Five, as Sterile Neutrino (via LHC, IceCube, etc.): No.

Yet, for this upcoming LHC report, the key point will be on the Higgs mechanism (HM).

For Higgs mechanism, the following issues must be addressed.

One, it must provide masses for some fermions (not including neutrino). That is, Higgs boson must couple very strongly with its cousins (Higgs-field fermions). If this new LHC report (with almost 100 fb-1 data) can still not establish this Higgs mechanism (with the right proportion), it is time to change the name of this new boson to Vacuum Boson which decays mainly via the diphoton channel.

Two, as Higgs mechanism cannot provide the masses for neutrinos, neutrinos should be Majorana particles. That is:

First, there must be neutrinoless Double Beta Decay.

Second, neutrino and its anti-particle must be identical, cannot be distinguished.

Third, neutrinos can have inverted mass-hierarchy.

If these three are not verified in this huge data (LHC and other neutrino data), Higgs mechanism is wrong. 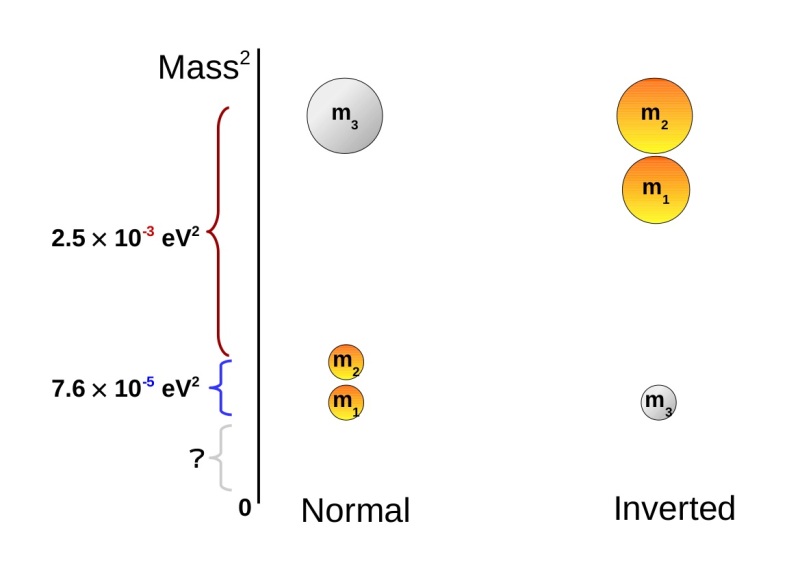 On the other hand, for the G-theory (Nature’s Manifesto; see https://tienzengong.wordpress.com/2016/12/10/natures-manifesto-on-physics-2/ ), all the above shortcomings of the HM are removed.

The mass-rising mechanism for ALL fermions (including neutrinos) is via the {bouncing (having momentum change) between (ghost point) and (matter universe)}. The mass-rising for bosons is caused by the bouncing between fermions. That is, neutrino is in principle not different from all other fermions (quarks and electrons, etc.).

So, neutrino (in G-theory) cannot be Majorana particle; that is,

No inverted mass-hierarchy for neutrinos.

Furthermore, neutrino and its antiparticle must behave differently in the CP symmetry.

In G-theory, Planck CMB data (2013 and 2015) was easily derived, without any WIMP. Thus, there is no chance for these new LHC reports of seeing any WIMP.

Any correct experimental data cannot go beyond the scope of {Nature’s Manifesto}. Nowhere to Run, for sure.

Note: most graphs below are taken from the CERN/Aspen reports.

The Standard Model (SM), based on Higgs Mechanism (HM), cannot account for:

The missing (failure) of one item above will be a deadly blow to SM, especially its base, the Higgs mechanism. If all the above items are missing, the entire mainstream physics collapses.

But, this new data (80 fb-1 from LHC and many others) show the following.

One, NO Higgs mechanism: the b/-b quark decay channel was not even talked about.

First, there must be ‘neutrinoless double beta decay’

Third, neutrinos MUST be their own anti-particles.

But, all these three are NEGATIVE from the newest data. 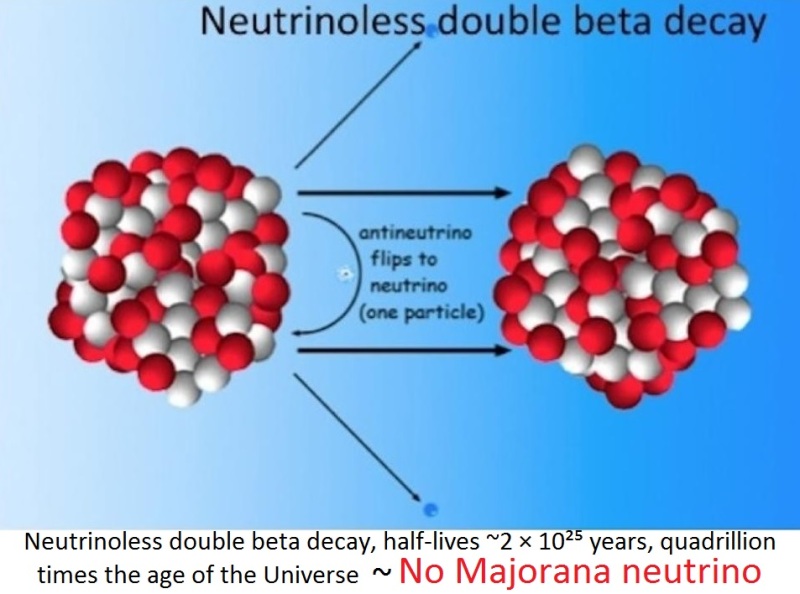 No Majorana neutrino by definition (being its own antiparticle), see https://www.quantamagazine.org/20160728-neutrinos-hint-matter-antimatter-asymmetry/ and http://www.symmetrymagazine.org/article/is-the-neutrino-its-own-antiparticle

No Majorana neutrino is very significant, as neutrino must not be different from other fermions (quarks and electrons, etc.). Thus, their mass-rising mechanism must also be the same. As Higgs mechanism (HM) cannot account for neutrino’s mass, HM must be wrong completely.

Higgs mechanism cannot account for the dark mass. So, it needs SUSY. In fact, SUSY is viewed as the super Penicillin for all the problems of the mainstream physics. 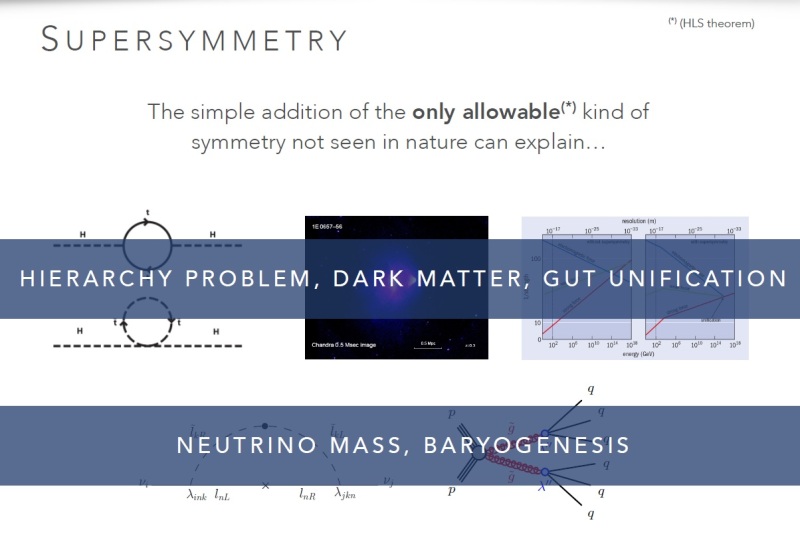 However, even this SUSY Penicillin cannot derive all nature constants and Planck CMB data.

Of course, the presentation shows that SUSY is not found in this 80 fb-1 data. 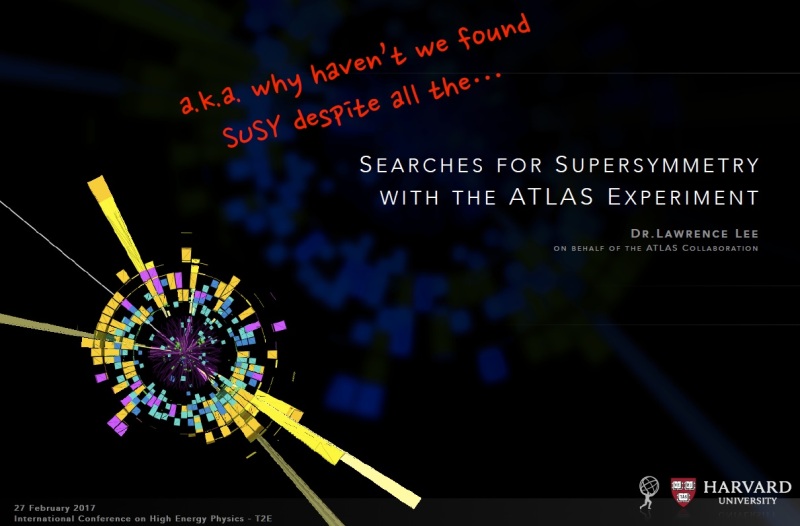 Furthermore, SUSY is further ruled out in the WIMP data, in the LHCb data, etc. Without SUSY, all those problems cannot be addressed in the mainstream physics.

The LUX data was known for 6 months. This time, the LHC data further ruled it out most of the Gev WIMPs. The exclusion line is very much reaching the neutrino floor (the yellow area). 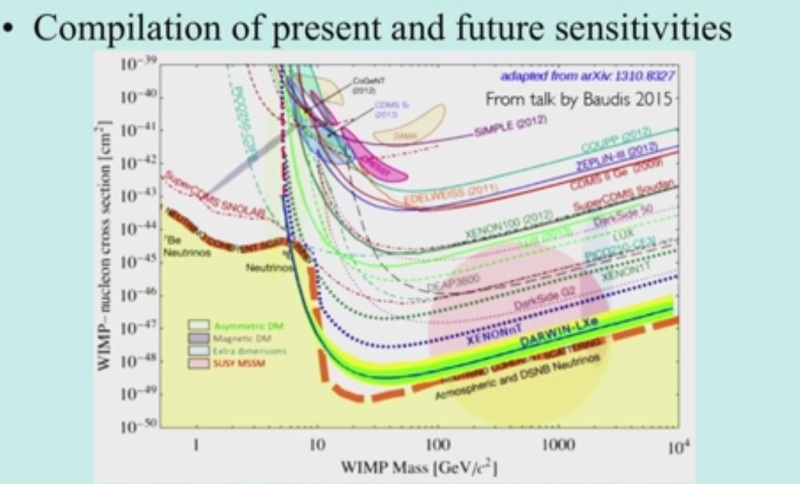 Most importantly, the PICO data (addressing the low mass region, the axion) was also analyzed. And, it very much excludes the low mass WIMP (such as axion). 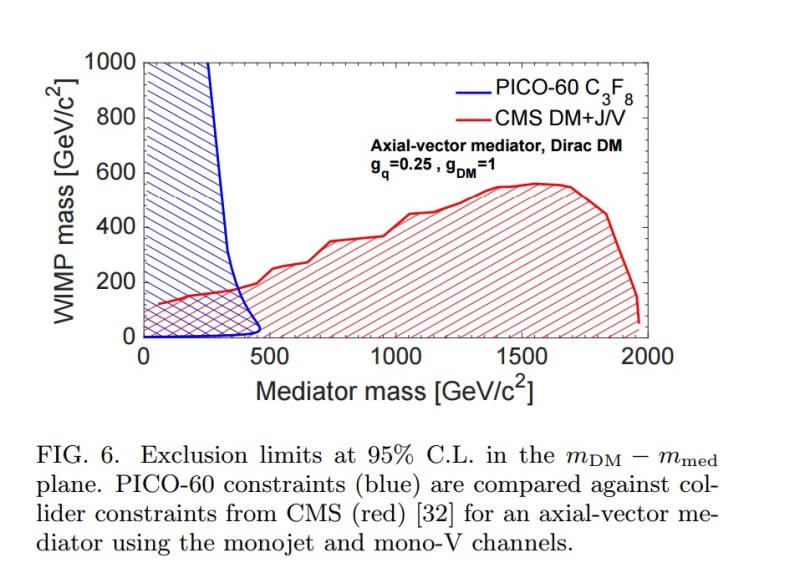 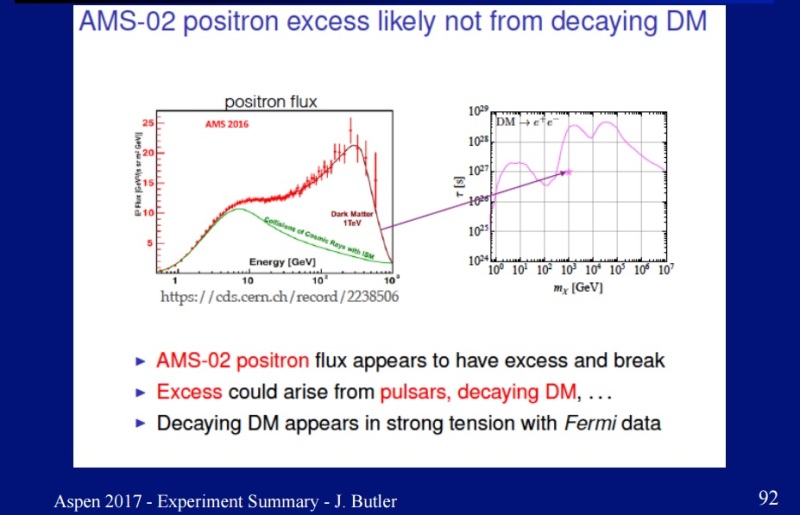 Again, the AMS02 anti-proton excess can be accounted for by the known cosmic processes (see https://home.cern/about/updates/2017/03/cosmic-collisions-lhcb-experiment  and the following graph).

Only G-theory can derive (calculate) this new boson’s mass.

About the Higgs: see, https://www.linkedin.com/pulse/before-lhc-run-2-begins-enough-jeh-tween-gong 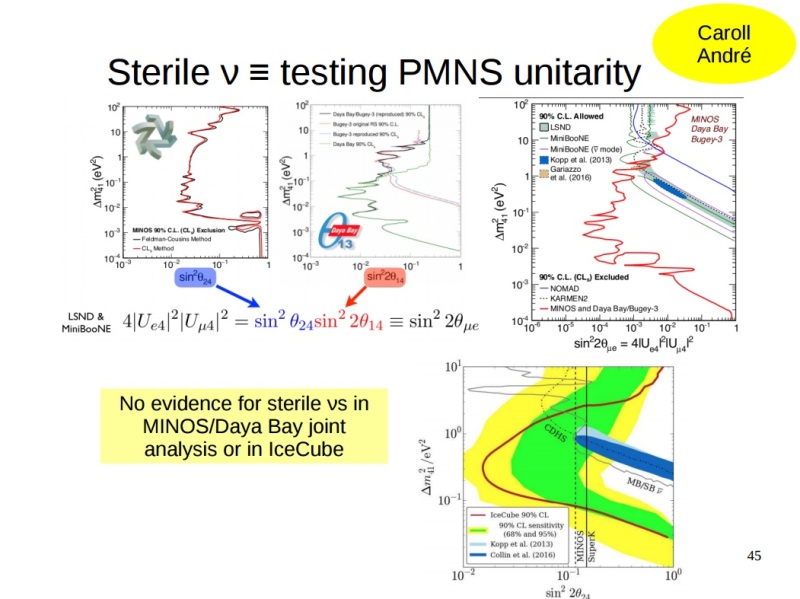 Two, NO BSM-kind of particle of any kind: any kind of BSN particle (SUSY, axion, sterile neutrino, WIMP, etc.) will be sensed at the BS0 meson decay (analyzed by LHCb). But, NO, see https://home.cern/about/updates/2017/02/standard-model-stands-its-ground . 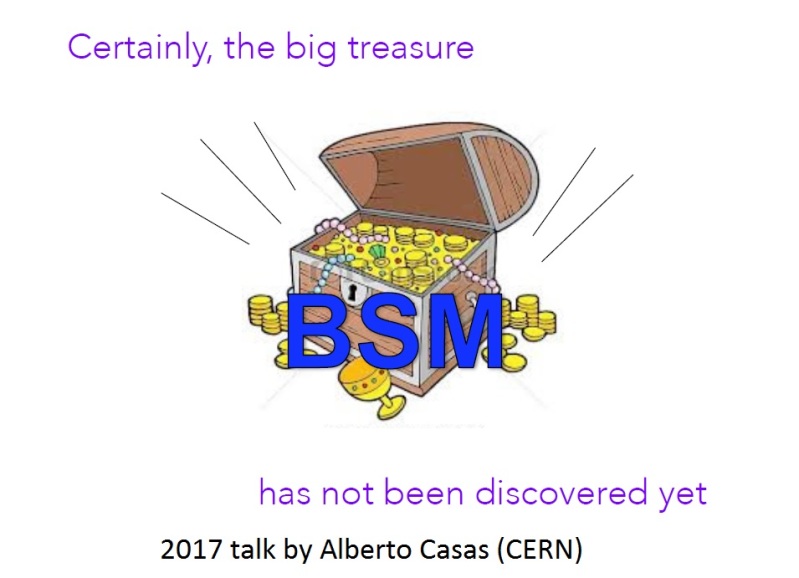 With all the data (reports) above, the mainstream physics COLLAPES all on its own.

Predicting the death of the mainstream physics alone is indeed a good victory. But, if without a replacing theory for this dead horse, this will only be a victory of self-masturbation. Fortunately, G-theory does rescue the mainstream physics from its hellfire dungeon, see https://tienzengong.wordpress.com/2016/12/10/natures-manifesto-on-physics-2/

One, the newest Hubble Constant (measured with Supernovae) is 9% higher than the Planck CMB data, reported by Adam Riess on May 11, 2017, see https://tienzengong.wordpress.com/2017/05/15/comment-on-adam-riess-talk/ . This verified the G-theory prediction, see graph below:

Two, the ‘inflation-war’ was officially announced on May 9, 2017. Anna Ijjas, Paul J. Steinhardt and Abraham Loeb came out to denounce the ‘Inflation theory’ and to advocate the cyclic multiverse (CM), see https://tienzengong.wordpress.com/2017/05/13/the-end-of-the-inflation-war/ . CM was the key point of the G-theory.

IT IS REALLY MISFURTUNE fOR THE  MAINSTREAM: